First sustainable city in America was born 5,000 years ago

North of Lima, in Peru, a city known 5,000 years ago, how to reuse materials, harness energy from the wind and sun, and consciously use the water for no desperdiciarla.En these places caralinos applied a high knowledge in science and technology as well as in managing the economy and social organization that promoted its development.

The Carales looked at his surroundings, understood and decided to build their buildings at the site would have less impact on the environment. Thus, the sacred city of Caral resolved how to be sustainable five thousand years ago. The revelation was made by archaeologist Ruth Shady and his team in the report The sacred city of Caral civilization. Sustainable model: environmental management and disaster risk.

«There was a space prior knowledge of the settlement to make use of resources without depredarlos valley,» said archaeologist Marco Antonio Bezares to the Nation. «I never settled in the valley. Took the concourses to provide buildings, always with respect to the valley and the coastal mountain «he added Bezares.

Although Caral as an archaeological site known since 1940, Shady and his team began excavating in 1994. 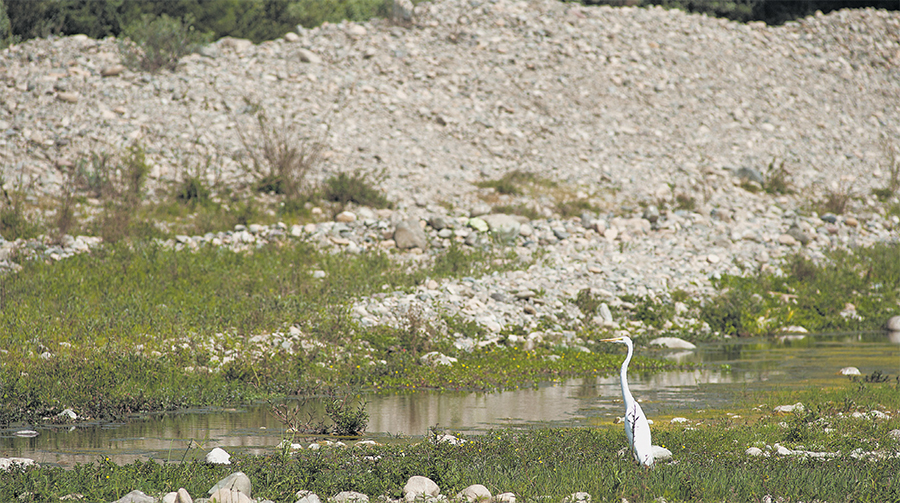 The Carales managed Supe river basin as a unit to guarantee the supply of water resources.

The Carales joined the oldest, Egypt and China contemporary civilization in America. They settled in the north-central area, in the valley of Supe River between 3000 and 1800 BC. C.

They built 25 settlements where about 3,000 people were housed. The Carales raised their holy city in a high place surrounded by hills, which had an aquifer, good solar radiation during the year, little rainfall and moderate winds. Being located above the bed of the Supe River, they prevented flooding and to conserve the coastal forest, this worked like a retaining wall to the flooding.

With regard to water resources, the Carales managed Supe river basin as a unit. The torrent was used to irrigate crops, while the springs were intended exclusively for human consumption. During the time when the river dried, these sources were used for irrigation. Furthermore, in the hills above converging point between roads that facilitated trade and cultural exchange between the settlements of the Midwest.

«The roads were transverse, just had two kilometers, and his vision was to connect the valleys» Bezares said. This allowed them to diversify and thus not deplete the resource. As energy sources took advantage of the wind and sun. The first was powered by underground conduits within enclosures where there was a stove, which served to increase the temperature.

«By the power of wind and fire managed combustion and rapid heating of stones to cook food with low emission of carbon dioxide,» reads the report. The sun was used to dry the fish, which previously and thus salted, stretched his time fit for consumption.

The sacred city of Caral consists of 32 architectural ensembles. Of these housing seven, three sunken circular plazas, a central square and two squares. They used local materials for constructive purposes. The shicras bags were stuffed vegetable fibers of stones that were used in the foundations of buildings, while the technique-a woven thatch log frame, rods and fibers was coated with clay-was used on the walls. 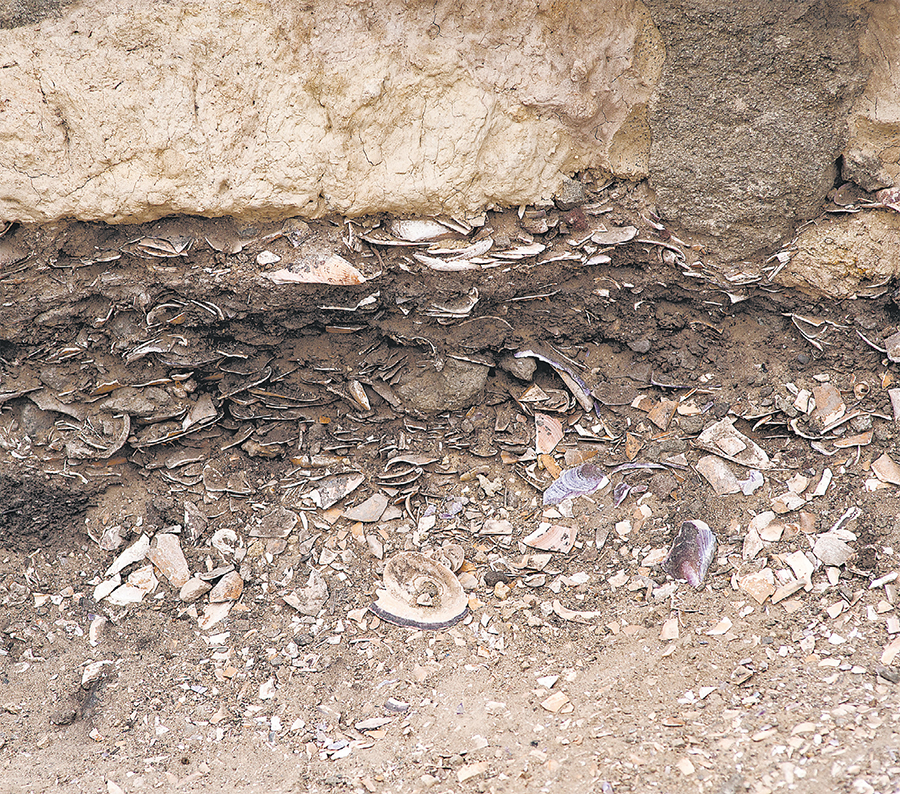 The architectural technique Carales included reuse and dry waste like the shells of shellfish and fish-bones by way of fillings platforms buildings. Thus, 32 buildings were erected. The huanca, rock placed in the middle of the main square was used as a sundial.

Understanding the environmental conditions was essential for food security, so they built a laboratory where they had record of what they observed.

«They paid attention to other indicators of changes in climate, in the presence or absence of certain species of animals, changes occurring in the sea with El Niño or La Niña, but also on the ground with the abnormal movement of birds , frogs, crickets and insects that currently play them in the valley as heralds of environmental changes, «highlighted in the study.

To Bezares, the Carales left a still valid lesson: the importance of knowing the landscape and maintain the green areas.

«The importance of Caral will not only transcend time it is busy, but that knowledge generated and cultural features will transcend later civilizations,» said Bezares. 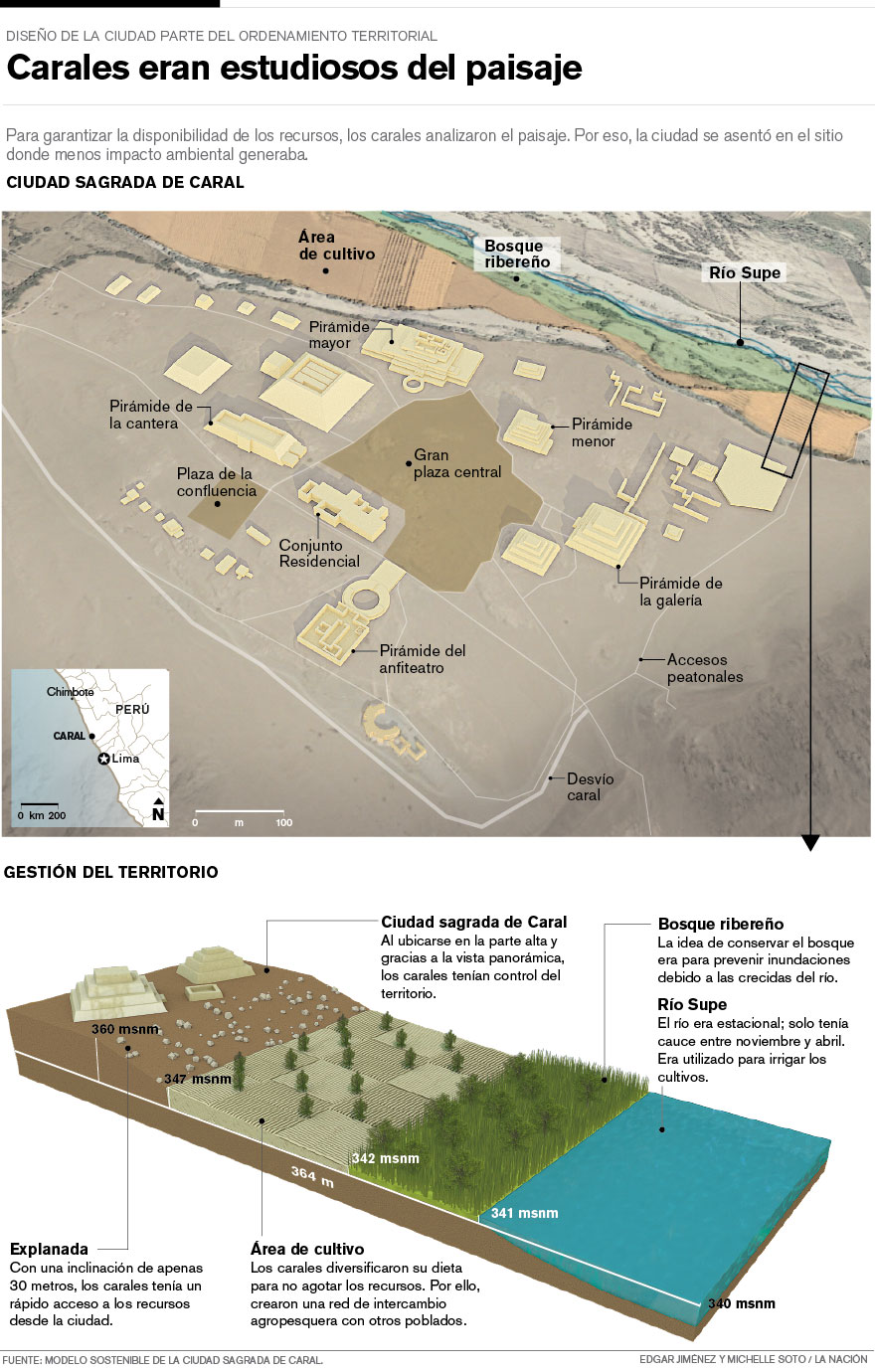