In its research policy, Caral Archaeological Zone regards the preservation of the investigated sites as a fundamental aspect that must not be neglected.  To do this, theoretical and methodological guidelines are taken into account, governed by international documents on the preservation of built heritage.

Caral Archaeological Zone, with the participation of a multidisciplinary team of conservation specialists, has embraced the principles of conservation basically inspired by the Venice Charter (1964-65), supplemented by the experience of the last decades of the 20th century in subsequent charters adopted by ICOMOS, including the Burra Charter’s conservation and management guidelines (in its three updates, of 1979-81-88 and 99), and those of the Zimbabwe Charter (2003), applied to the situation of the conditions of the ancient city and its environment.

Seismic destruction of the archaeological heritage is considerably greater in buildings made of earth or stone and mud than those made of any other material.  Three main facts enable us to define the problem of the greater occurrence of damage in monumental earthen constructions located in seismic areas, and the challenge of successfully conducting the complex task of intervention to prevent the irreversible loss of monumental value of the Sacred City of Caral. 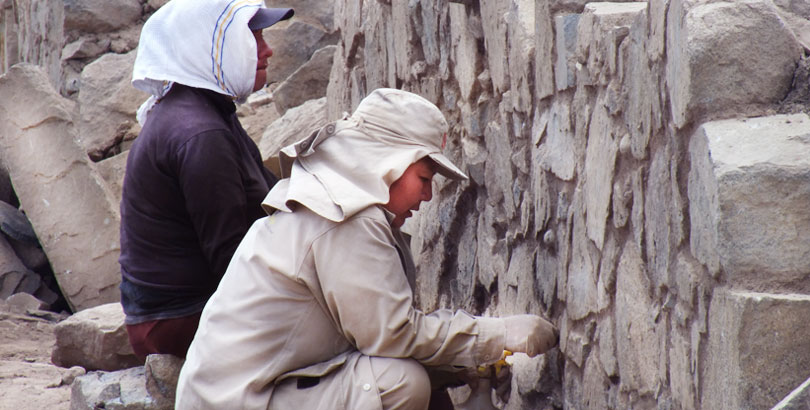 One day in the future, the most important conservation work done by ZAC will be merely preventive and based on the maintenance of a respected heritage, which will irradiate historical knowledge and education to the region and the world.   At present, however, it is necessary to carry out restoration and conservation activities on the archaeological monuments being researched.

Restoration is a multidisciplinary scientific and technical operational process, which, following a critical-analytical methodology, seeks to recover and transmit historical and aesthetic values under strict respect for the authentic evidence.  Restoration ends where hypothesis begins.  The calling to restore rather than reconstruct is always emphasized.

However, we bear in mind an important ruling of the Venice Charter: “… it is essential that the principles guiding the preservation and restoration of monuments be consensual and formulated in an international dimension, with each nation being responsible for applying a planning within the framework of its own culture and traditions,” to which we would add “and the geomorphological, environmental, and seismic conditions of its territory.”

The main principles and specific criteria applied to restoration activities are the following:

With regard to conservation (or maintenance), it is clear that the conservation work does not end with the first intervention: rather, this is where it begins.  To preserve the architectural building, an ongoing maintenance plan needs to be implemented, and for that purpose the monitoring of all the structures that make up the building is indispensable.

Physical protection includes activities for security against theft or vandalism or any other negative action produced by human beings; environmental attacks such as wind, drizzle or rain, sand, humidity, and radiation; and deterioration due to the presence of animals.  Some types of protection are: covers, windbreaks (of stone, or organic or synthetic material), and the planting of screens of trees.

Together with the careful observation of the above principles and guidelines, in the Sacred City of Caral, World Heritage, the following conservation methods and techniques have been applied: